😛 okay… while I love my oil paint, I actually meant a word picture… today I have a quick look at JC Stockli and two of her word babies… we writer’s love our novels like any mother that has waited ten long months (yep, you heard right… the nine month model is just a lie they tell young women to help soften the blow) and then 19 hours of hard labor… we love them no matter what happens after they go out into the world (though we may blame them for the 19 hours panting and sweat if they get too far out of line)

anywho… here are the promised looks into JC and her two babies… but first, a few words from JC on their creation… happy wordage everyone, Tracey

The series was originally conceived as your standard PNR, just for fun, because I couldn’t get Lucca out of my head. I found deeper significance in Evie’s plot when I decided that I am drawn to the bad guy (a real villain that is, not a bad boy). So I let Lucca simmer a little. Then real life flooded my mind. What better villain than that which we find in real life? Drinking, hubris, drug abuse, they’re all so prominent these days. I’ve seen loved ones suffer, because addiction is a non-discriminatory epidemic. We love obsessing over the right kind of wrongs and look down on those who fall to darker demons. Arent demons seductive though? I knew Evie’s plot was perfect for this. I used real world issues to make the addict the hero. The more I plotted, the deeper the issues ran. I’ve had a lot of fun using fantasy as a foil. 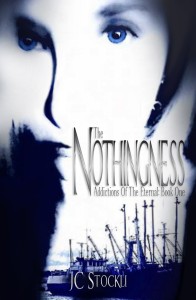 ADDICTIONS OF THE ETERNAL
BOOK ONE: THE NOTHINGNESS
2015 IAN Book of the Year Awards Finalist

5-Star Reviews Keep Coming In!
“Couldn’t put it down! Suspenseful and intriguing”
“A page-turner with an urban-goth heart”
“Brilliantly written dark fantasy is not for the faint-hearted”

Blurb:
“Fall from your graces into the depths.”

A dispirited addict learns that history repeats itself deep within hidden worlds. Evie Westvale is lost in the lifeless existence of her drug-laden fishing town. She finds much more than fellow addicts lurking beneath the docks. Craving escape from her inebriated reality, she discovers the presence of a dark stranger who haunts her dreams in the most delicious ways. Lucca has come to prey on the dregs of Fallhaven. He has not arrived by accident, and he is not alone.

Riding waves of blood and lust, Evie is forced to confront her dark past and an irresistible future, but can she survive the tempest brewing inside?

Received with 5-Star Reviews!
“I’ve fallen. JC Stockli grabs hold of your heart in this one, as well as inspires a few other responses I dare not mention.”
“J.C. Stockli did NOT disappoint… There are so many unexpected twists and turns throughout this book.”

Blurb:
“Have you found the light, or have you fallen?”

Evie’s life can never be the same as long as the Sempiternal continue to call out from the depths. She’s in limbo, too ignorant and afraid of the future Lucca has planned with her. She’s left Fallhaven, set adrift in a new city, and fighting more than withdrawal. Evan has become her constant companion, committed to assimilating Evie to a clean, mortal life, but at what cost?

Though he fights to help her conquer her demons, still she struggles with her cravings for Lucca’s nothingness. How can she move on when there can be no light to her days without the darkness of his nights?

J.C. Stockli is inspired by music, the past, and possibilities. Happily Ever Afters are only achieved through the cost of some blood, guts, or a soul or two… if at all.

Also an established full-time professional with her MBA, over the years she’s moonlighted as a magician’s assistant, a roadie for a heavy metal band, a dance fitness instructor. She’s even dressed up as a promotional character at public events. She’s a current member of RWA’s Futuristic, Fantasy & Paranormal (FF&P) and New England (NECRWA) chapters, loves to dabble in cover design, and feels passionately about the power of authors supporting other authors.

She lives along the Massachusetts coast with her husband and two children. You’ll likely find them dancing around the house, tearing up the dirt, or out on the water soaking in the sun and breathing in the sea salt air.